Rona is the worst thing to happen to civilization in eons. No question about it. But if Tottenham have taught me anything it is to always look on the bright side of life to avoid jumping out windows… so in that spirit, despite life kinda sucking at the moment, here are some silver linings from the pandemic to maybe brighten your day a little bit:

2) 2021 is going to be the best sports year in the history of the universe. We got Olympics, we got Euros, we got condensed WC22 qualifying (for USMNT), and most importantly of all we will hopefully have a vaccine that allows us to resume normalcy at which point fans can return to stands and we will enjoy and appreciate tf out of live sports like we have never done so before

Speaking of which, we got some of those coming up this week. But before we take a look let’s get in the mood with some babymaking music:

After the longest R16 in history, the final results shook out like this: 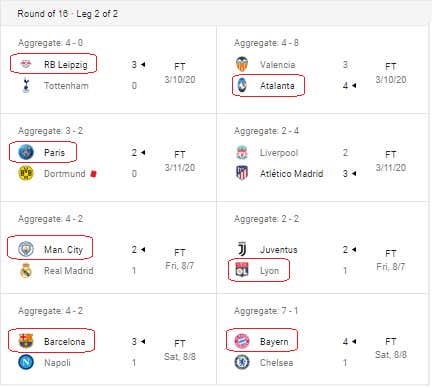 UEFA has eschewed the normal “random”-draw-for-matchups-every-round format for a set bracket this year, which looks like so: 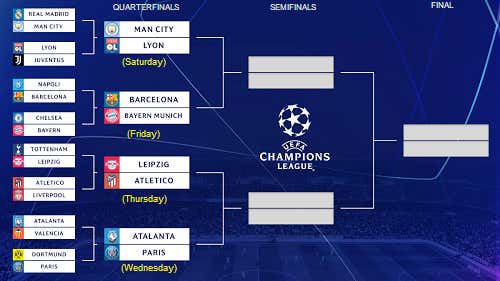 Keep in mind several of these teams (specifically those playing on Wed/Thur) are for the most part coming off exceptionally long layoffs… what does that mean? Who tf knows, but I’m excited to find out.

Recent form
Atalanta: Good when they want to be but switched off a lot more than a typical Pep squad
PSG: Not much to speak of, though they pulled out a close win in their domestic cup final over fellow UCL quarterfinalists Lyon on penalties

Breakdown
Atalanta is incapable of playing in a game that is not batshit crazy, and hopefully this is no exception. Both teams come in missing some key players – injuries to Josip Ilicic for the Italians and Kylian Mbappe for the Frenchies are especially big losses.

But both clubs score for fun and at least one of them (hint: not PSG) pretty much say eff it on defense… so this should be a fun one and, in fact at the risk of jinxing it, my LOCK of the week is the OVER in this one. I have been preaching Atalanta’s praises for weeks now so I’m pretty much locked in.

Recent form
RBL: faltered down the stretch……. in June
Atleti: solid since the restart… though the season ended in mid-July

Breakdown
Talked about it on the podcast but Timo Werner leaving RBL in the midst of a Champions League run to start training with Chelsea is understandable (they will be playing competitive games in less than six weeks) but I personally think it was a terrible decision. You form a bond over the course of a season – or four seasons for Werner – with your teammates and I feel strongly you should stick it out until the final ball is kicked. Werner felt differently. In a professional sense that makes sense. It's not "snake" behavior. I still hate it.

More importantly for the game at hand, that leaves RBL shorthanded up top in a game that they will never every little advantage they can muster if they are gonna find a way through Atletico. Single elimination games against well-rested Diego Simeone teams are a recipe for having a not having a good time. This result has been clear for weeks…

Recent form
Barcelona: not the big bad Barça of old but they still got Messi
Bayern: WAGON

I doubted Barça heading into the Napoli game last week but Messi did the damn thing once again. Like, wut?

We all continue to be witness.

That said he can’t be on both sides of the field at the same time and Bayern’s offense has looked SCARY good over the last few months. Sounds like a recipe for a surprisingly one-sided affair unless the little maestro singlehandedly carries Barcelona to victory. I’m not saying no way… just saying the chances are exceedingly miniscule.

Shouts to Lyon for putting old ass Juventus to the sword last round, causing all manner of soul-searching (and bloodletting) in Turin. Nobody makes it this far in Champions League without having some serious heart and talent, and this being a one-off game where anything can happen… I’d be lying if I said I didn’t think long and hard about laying a little something on the (other) Frenchies against a City side that has proven capable of laying a little something of their own – an absolute egg – every now and again. Anyone who watched them play Southampton coming down the stretch and (to a lesser extent) Arsenal in the FA Cup know what I’m talking about.

And yet after talking all that trash I’m still too much of a wuss to go against Pep’s people. I had them as the favorites to win the whole shebang [note: not to be confused with Atalanta – my darkhorse and the team I’d actually put money on]… before Aguero went down. That definitely shooketh my confidence. But I’m at least sticking with them to scrape through a very tough opponent this week. 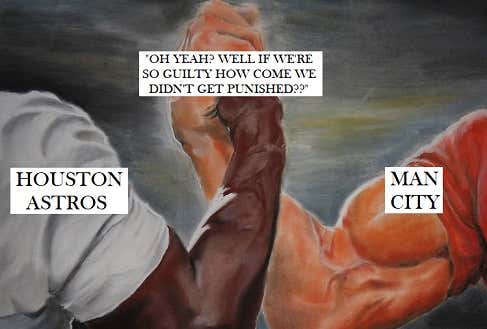 So there we have it. What a week. Couldn’t be more psyched. Haven’t decided if I’ll put out a Europa semi-finals preview of not. Leaning towards yes because the matchups are pretty damn good and, let’s be serious, what else do I have to do with my life? In the meantime stay safe out there kids.