Feels like it was just last week that Bayern Munich were being (rightfully) anointed as the biggest swinging dick in the jogo bonito cracker factory. And yet here we are. The CHAMPIONS LEAGUE group stage is already BACK. What else is there to say? Hint: not a damn thing. A veritable cornucopia of incredible games is on deck today and tomorrow, and plenty more over the coming weeks and months. First, though, let’s get our minds right with the sweet sounds of soccer sex:

That music means boners for you, boners for me, boners for everybody. Now on to the previews and pontificating and prognostications…

The eight groups are set.

The most important thing to keep in mind about them is this:

Go ahead and add Jesse Marsch (coach of RB Salzburg) to that list as well… and if the club makes it out of the group stage then Brendan Aaronson – set to move from Philadelphia Union to RBS in January – may also get a taste of some Champions League action. Incredible glow up for American soccer. Pray for the losers and the haters, of which there are many who keep talking about T&T in 2017 as if there hasn’t been an entire changing of the guard in the meantime (hope you are listening, Gregggggg).

Anyway, moving on, here is an extremely knee-jerk reaction for each of the eight:

• GROUP A: Fun group. Bayern will eventually be a machine but they got off to a slow start (defensively anyway) this season – likely the result of almost no time off this summer – which may give the rest of the group a little belief… but probably not. Atletico is not their usual defensively-sound selves but also have a little more firepower than normal. The big question is whether Salzburg can pip Atleti. Tough ask but never count the Austrian buggers out.

• GROUP B: Surprisingly open foursome. Real Madrid are unusually reliant on defense and – their fans won’t wanna to hear this – I’d argue they have an outside but legitimate chance of not making it out of one of the only groups in which all four clubs have a shot at advancing. Hear me now and believe me later: watch out for Inter.

• GROUP C: This is what I wrote about Group C last year:

“Who tf did City pay off to get this group, I mean MY GOD. It’s a good thing too since they have precisely 0.5 healthy CBs available at the moment.”

That same exact sentence was perfect for describing this season’s Group C a couple weeks ago… but then City dipped into their unlimited funds and bought some defensive help – notably Ruben Dias from Benfica for a cool $80 million. That likely leaves Porto and a sneaky strong Marseille side fighting for second place. Olympiakos ain’t scaring anybody.

• GROUP D: Liverpool were looking like the class of the group but the loss of VVD makes things a little more interesting, especially given the presence of the world’s biggest wild card in Atalanta. The good news for the Reds is that Ajax have been depleted (though doubting their ability to restock would be a mistake) and Midtjylland kinda sucks.

• GROUP E: Chelsea and Sevilla are basically polar opposites. The blue team is going to score for fun and worry about defense later. Vice versa for the red team. Both clubs are fatally flawed but have been handed some luck in the form of two lesser opponents to round out the group. Of the two, I didn’t see anything from Krasnodar in qualifying that would suggest they will do damage, but perhaps Rennes could sneak up on somebody. Where there is a Kepa, there is a way (for other teams to come away with points).

• GROUP F: Many are calling it the “weakest” group overall but anybody actually saying those words out loud can catch these babyhands. Nobody talks about The Babyjesus Jr’s group like that. A more appropriate description would be to call it the most “up for grabs” group, with Zenit, Dortmund and Lazio all having genuine shots at finishing in the top spot. Lazio have been quietly poor so far so I’d give BVB the inside shot with Zenit my choice for second… but the (other) Romans should be in the mix as long as Ciro Immobile remains healthy.

• GROUP G: Obviously the only thing anyone is going to be talking about will be the matchups between Sergiño Dest and Weston McKennie. Hard to imagine Dynamo Kiev or Fernvegoqsros making much impact.

• GROUP H: This group looks like it could be all sorts of fun on paper… provided RBL and (especially) United show up. And don’t look now but the Turkish “minnows” are look a little stronger than a lot of the fourth pot squads in other groups. PSG stumbled out of the gate but seems to have re-found its form suggesting it will be a dogfight for the second qualification spot.

So how is this sumbatch going to play out (assuming corona doesn't pull another fast one on humanity)? Here are the odds all 32 teams according to the quant nerds over at FiveThirtyEight: 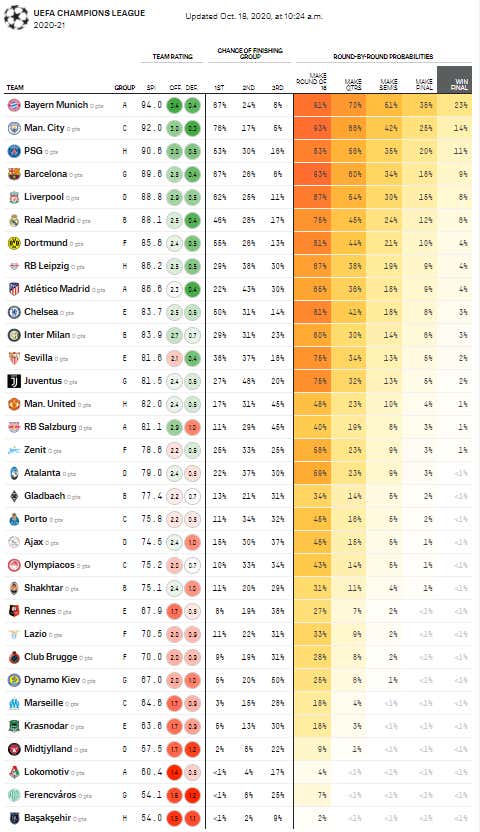 And finally the full schedule for this week’s first matchday to be played on Tuesday and Wednesday: 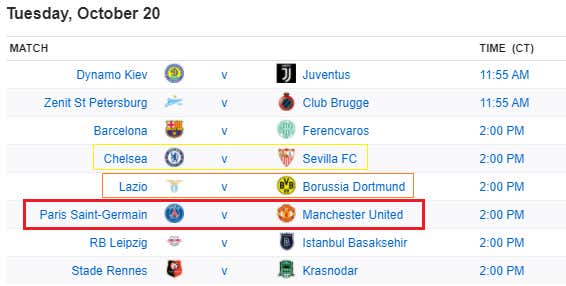 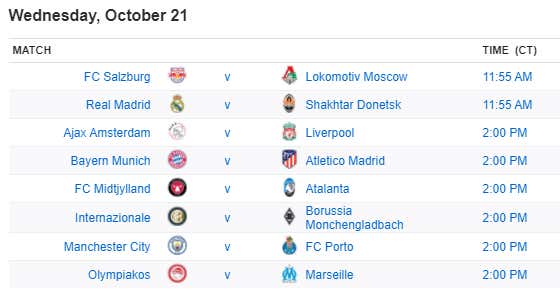 IMPORTANT programming reminder: CBS now owns the rights to Champions League and it does not appear as though they are planning to show many games on TV. It sucks. Unlike NBC (and even ESPN/Fox), CBS has not earned the right to immediately monetize soccer like this. It sucks for existing fans and sucks even more for soccer in the US since WAY less casual fans will now get exposed to the best games in the world. But there are some options if you don’t want to subscribe to the CBS streaming service. One is illegal streams. The other is Spanish-language TV (eg, UniMas and TUDN. Sucks but this is the new normal so we might as well get used to it.

Member when United lost 0-2 at home to PSG in the 2019 UCL R16 first leg and caretaker manager Ole had a foot out the door… then the Red Devils came up with a miraculous 3-1 win in France (topped off with a questionable 94’ penalty) and United immediately handed Ole a full-time contract?

As for this week’s game, there are so many “unknowns” and “uncertainties” heading into the game it’d make your head spin. PSG is missing roughly half their squad through injury. United – who got stomped by Spurs then sleepwalked for 45 minutes before coming alive and spanking a solid Newcastle this weekend (meaning they are all over the map at the moment) – will similarly be without Harry Maguire, Edinson Cavani and Mason Greenwood. So some serious lineup rejiggering would suggest it will be a rather ragged affair, with mistakes ultimately deciding the outcome.

I don’t know what to think of Lazio this season but they have quality and are playing at home (whatever that means this season) so I’ll go out on a limb and say they make this a closer game than the bookies expect… especially with Dortmund pretty thin at the back due to injuries and suspensions.

Guess who’s back. Back again. Kepa’s back. Tell a friend (who likes to win money betting overs).

Chelsea is must-watch at this point both because they are as scary good going forward as they are scary bad at the back. To be clear it is not ALL on Kepa. Kurt Zouma hasn’t been much better at CB and Thiago Silva hasn’t exactly been killing it so far either. Sevilla is solid defensively and manager Julian Lopetegui will no doubt try and throw some tactical wrinkles in to confuse and slow down the Blues. It might work… for a while. In the end though I think Chelsea has too much quality and their helter skelter attack will somehow, someway eventually carry the day (and Kepa limits himself to one absolute howler).

Some other picks in the hopes that I eventually get one right: