Another round goes to Chicletsin the brawl for who wins the most Barstool Sportsbook boosts. Is it getting too easy? Maybe but it's a crime to let a sucker keep their money.  Not only did the players get a point but 2 of them also sniped to make sure no funny business went on.  I am going to start putting some winnings on any scorer to really go for the throat.  Barstool sportsbook has been warned officially!! 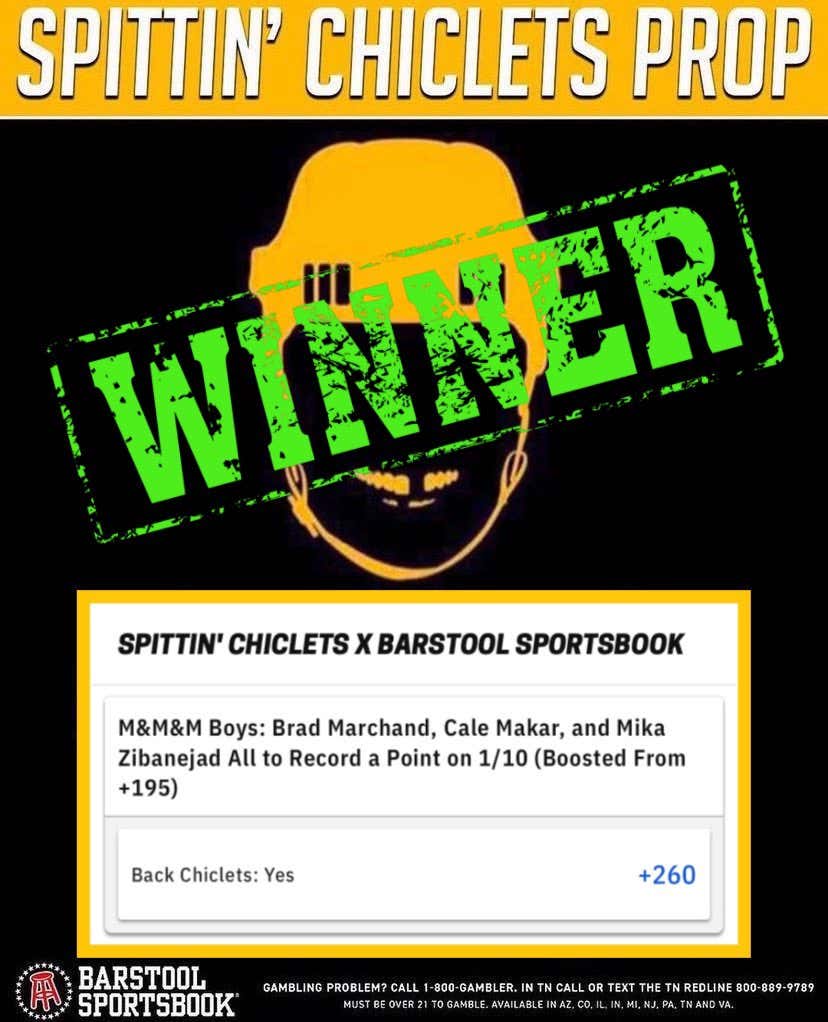 Here comes tonight!! This is a favorite and one of the more successful boosts, the 5 for 5.  For the newcomers, this boost is 5 games to go over 4.5 total goals for both teams.  Pretty easy especially this season with the amount of skill in the league and lack of defense played by most teams

Chicago at Columbus- Kane, and Debrincat have been carrying the hawks offensively all year again, and tonight that will not stop. Players see a matchup like this and their eyes widen as they look to pad the stats.  Columbus plays a run and gun style that we all love to see and as good as Zach Werenski is he can’t be on the ice the whole game, so they give up a ton of goals.  This game could be a single play on the regular over 6 +105, I’m sure Mr. Ice is giving it a look. Only worry is getting a couple past everyone's favorite goalie Marc-Andre Fleury.

Colorado at Nashville- Two of the hottest teams in the league.  RA has a man crush on Saros but viewers have seen how quickly and often the Avs can score.  Avs played another tough game last night in Denver and now the travel to Smashville plus not having Landeskog will make this a tough road win but these teams should easily go over 4.5 goals.

Pittsburgh at Anaheim- The battle of teams that traded away the future podcast star with his own vodka named after him, the one and only Ryan Whitney.  Pens just had their 10 game win streak come to an end and realize they have to score to win so tonight they will be ready to get the offense back on track against a Ducks team missing their #1 goalie.  Look for Zegras and Terry to light up the scoreboard in a losing effort, the Pens are too good. There is a rumor that Geno Malkin may suit up so we can count on him for a couple points as well.

Toronto at Vegas- Biz’s Leafs left Denver with their tail between their legs after blowing a 4-1 lead to the Avs. Did this lead to an early curfew in Sin City? Does the coach dangle the carrot of a win in Vegas and the boys can have a long dinner on the strip? I think so.  So the Leafs will be ready for this game, which much to the disgust of Whitney could be a preview of the Cup Finals come June. Vegas comes out flying at home and usually hits the over 1.5 1p line so we should get an early jump on the over 4.5 and cruise to another winner for the boost.

Detroit at San Jose- Whenever these types of boosts are created, we try to include the Red Wings. This is not only because of the amazing fans we met during Barstool Hockeyfest, but they have some great young talent that can put up points. I expect EBR preseason prediction Calder winner Jonathan Dahlén to have a big night tonight trying to outshine the young Swede Lucas Raymond. Sharks also have Thomas Hertl playing like a man possessed with his name rumored to be on the trade block.

Get over to the Barstool Sportsbook, go under the Exclusives page and ride with the Chiclets Crew on this amazing boost.  My favorite part is that it takes all the thinking out of the night as it covers five games from 7 pm ET to the late-night hours when I should be waking up but instead I’m going to bed because I needed to see the boost through for the crew.